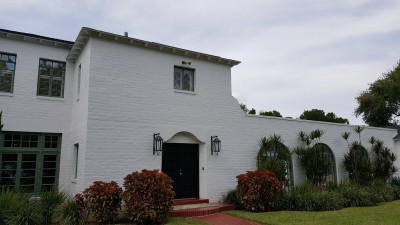 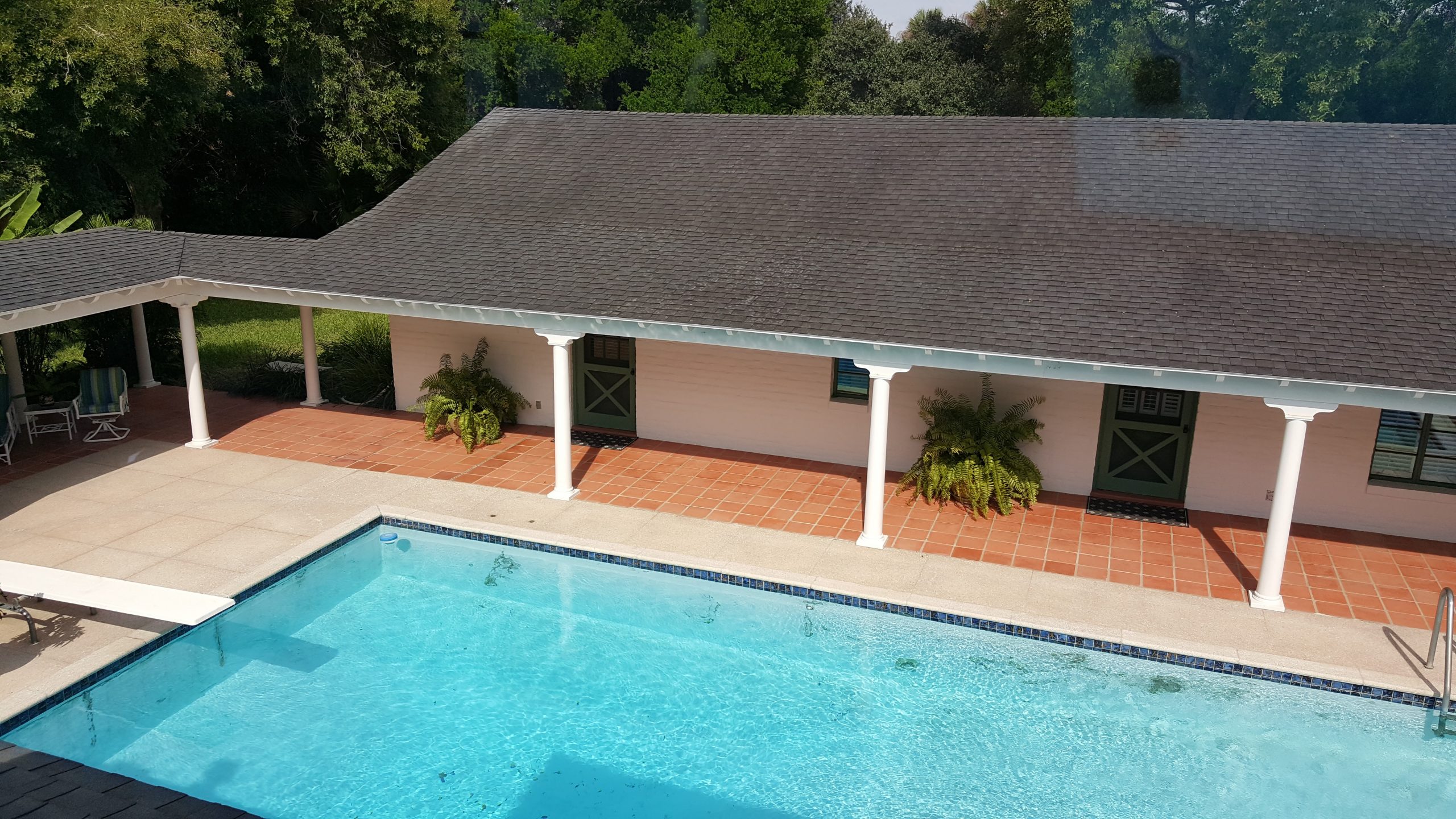 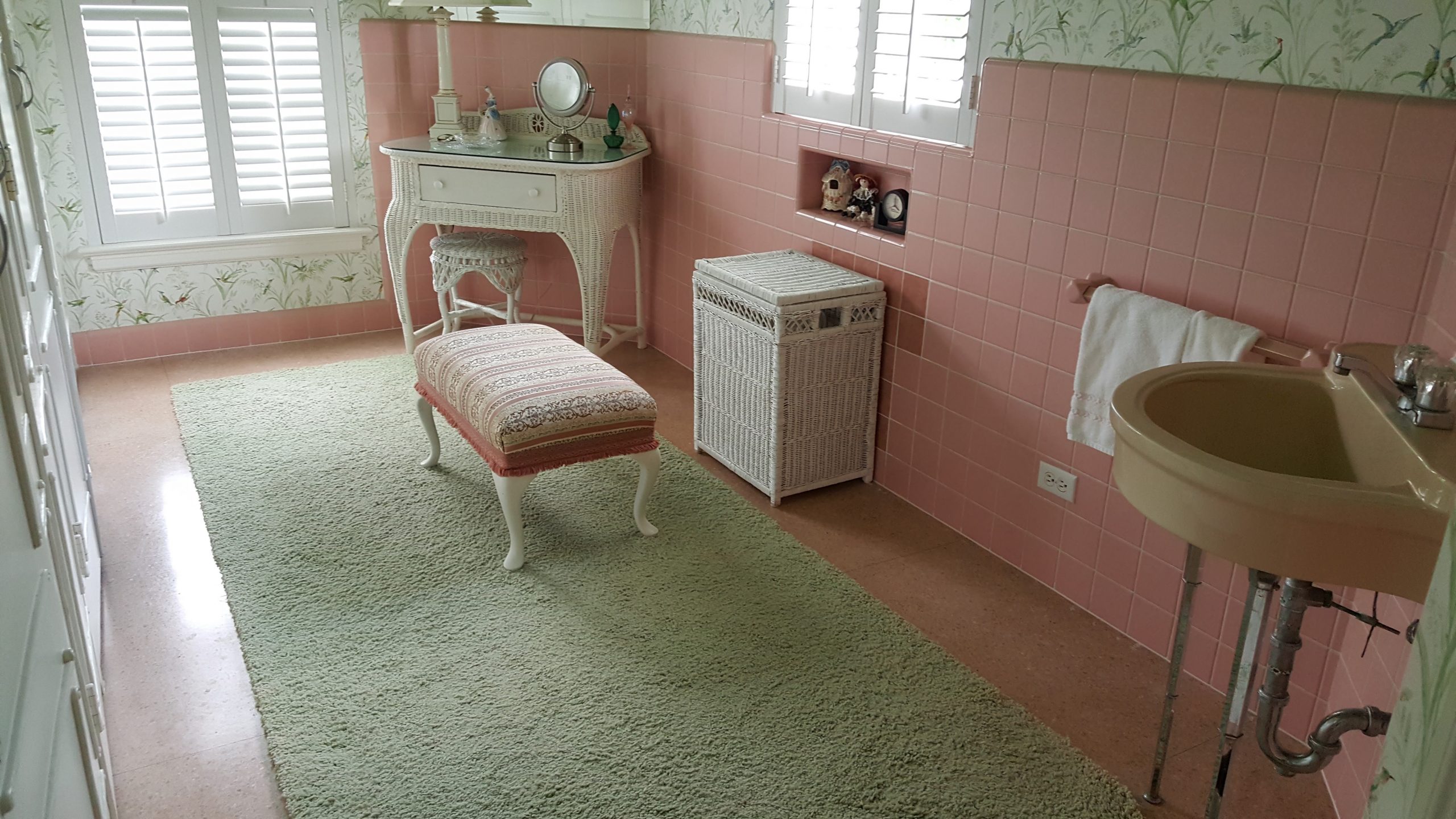 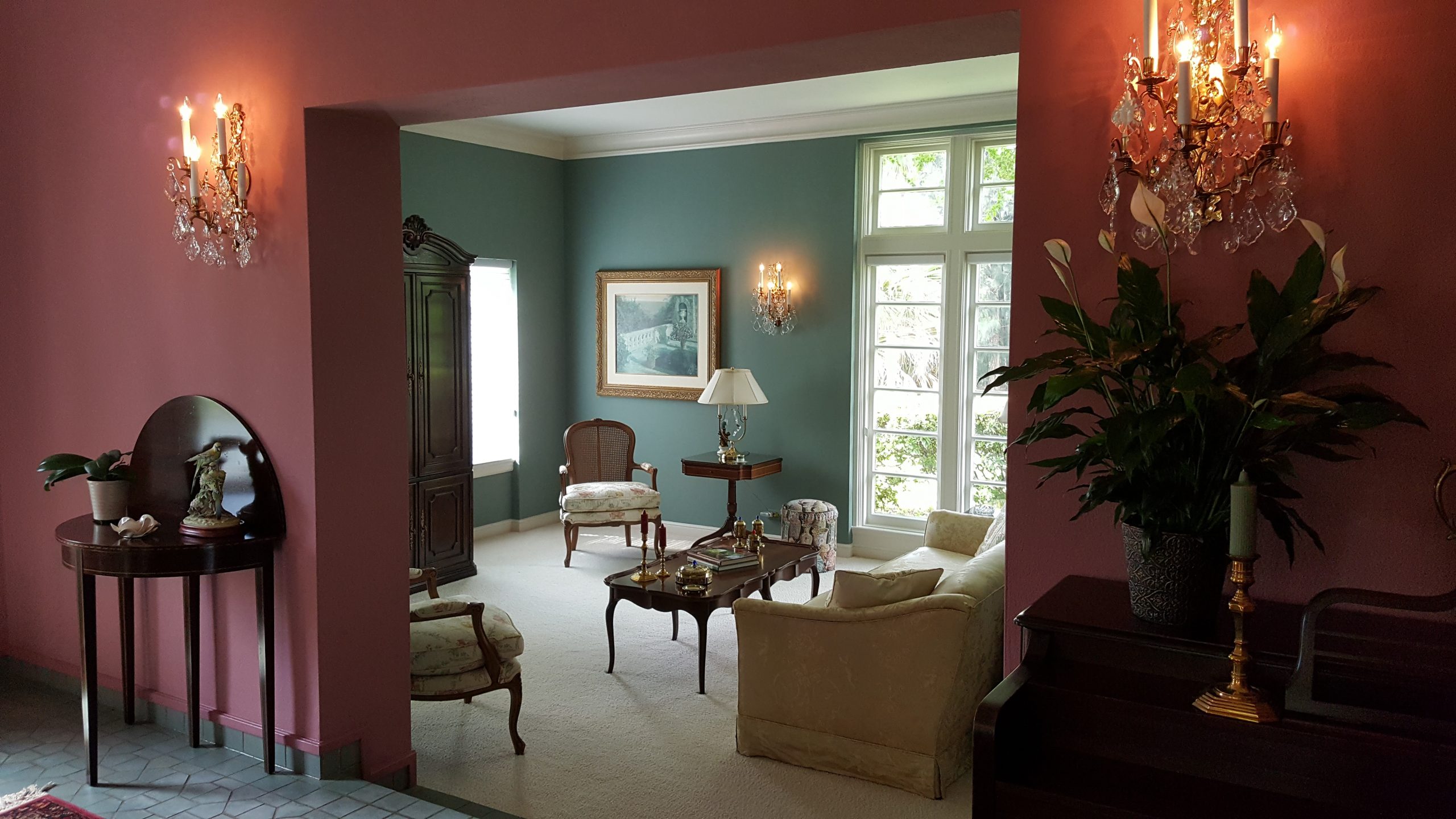 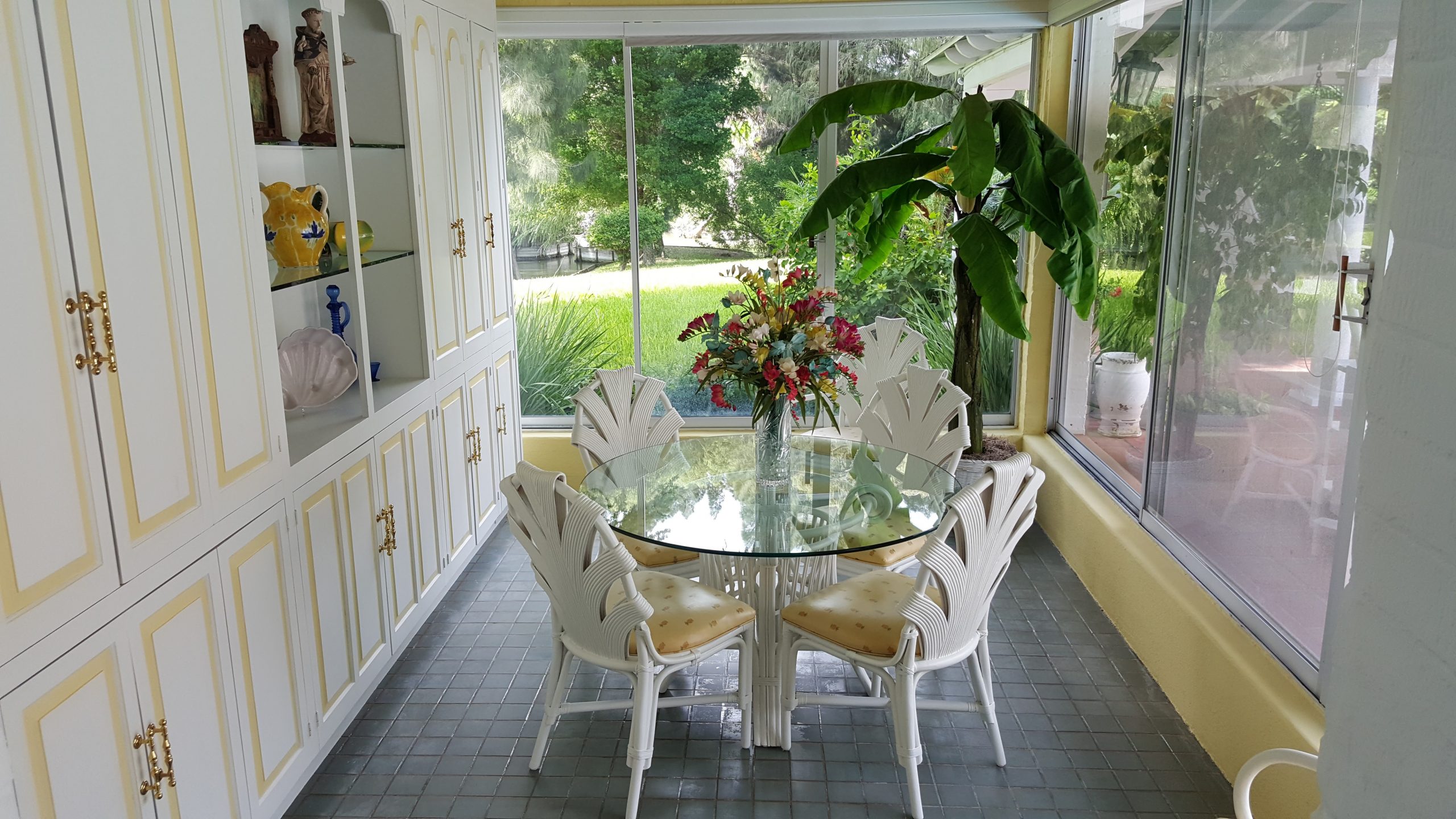 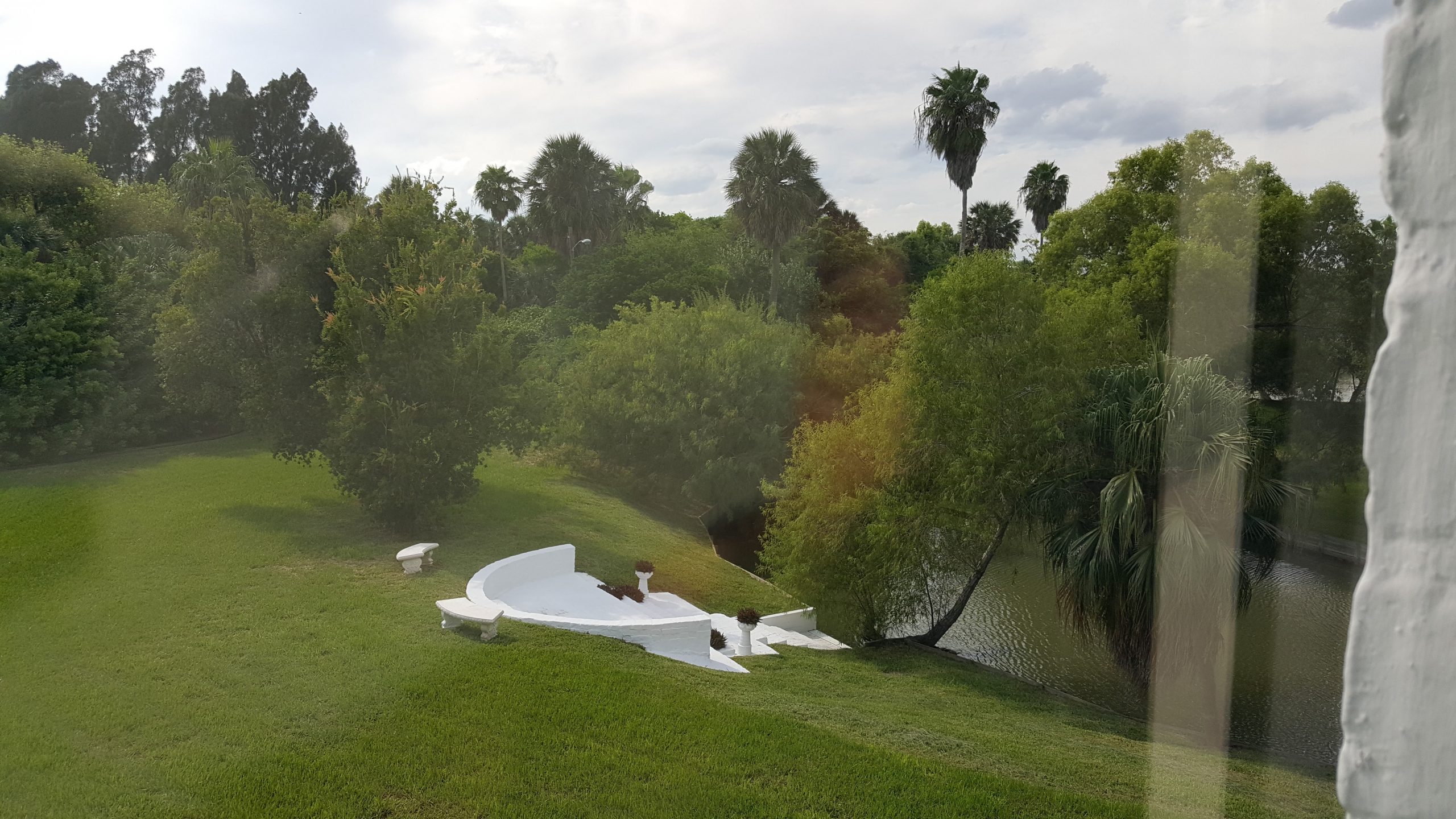 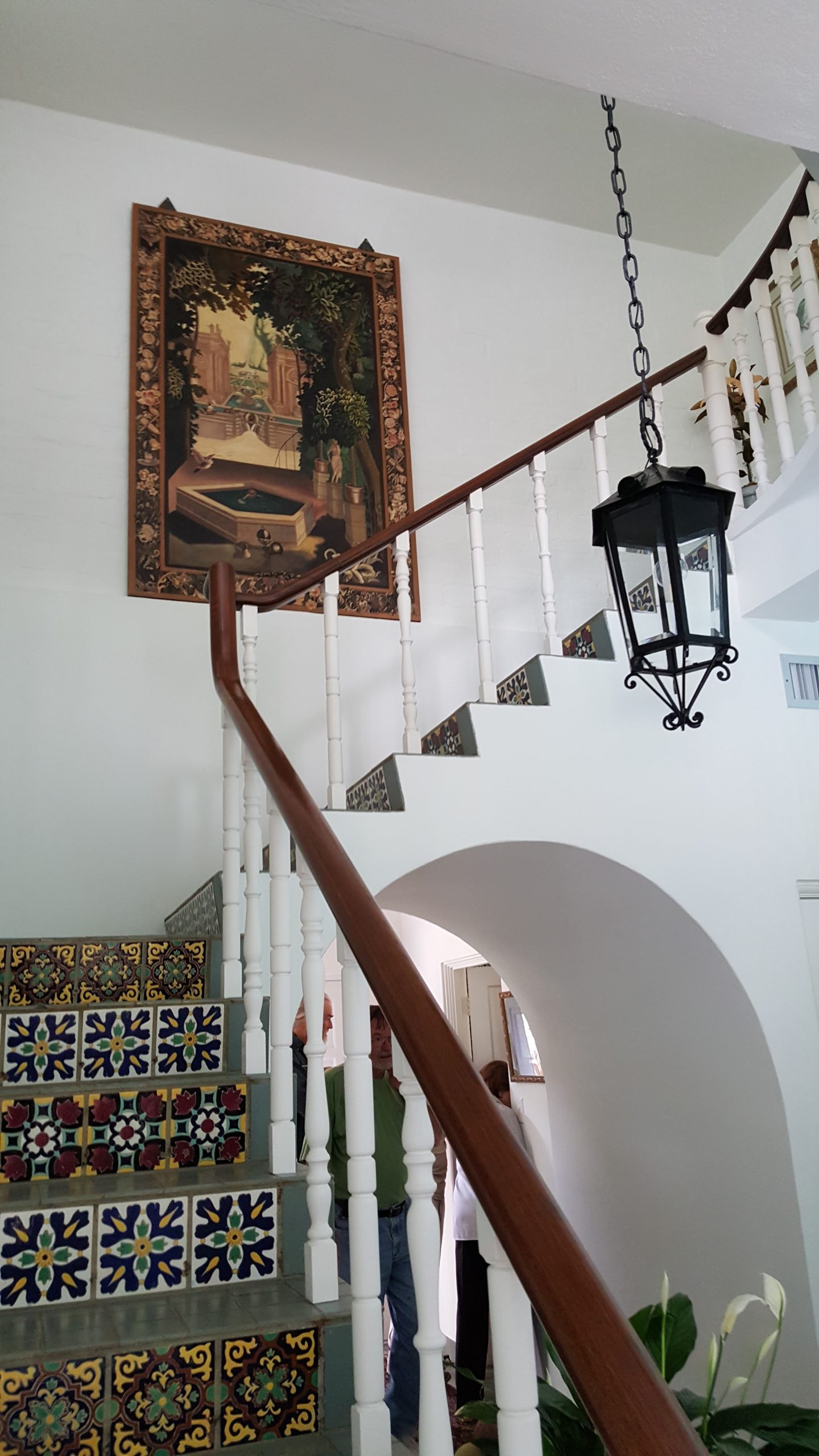 One of the two grandest houses built in Brownsville in the Depression decade was this country house, designed by Brownsville architects A. H. Woolridge and Frank E. Torres for Katherine Barnes and S. Miller Williams, Jr., of Tulsa OK. Williams and his brother founded a construction company that eventually specialized in steel pipeline construction. The next generation of family members transformed it into what is now the largest interstate natural gas supplier in the United States, the Tulsa-based Williams Company. Mr. and Mrs. Williams built this house as a seasonal house for use in the winter. When construction of the Miller House was announced in the Brownsville Herald in June 1940, it was described as “palatial.”

The house was built in two increments: the two-story family wing on the west and a one-story guest wing on the east, which together frame a central, walled patio (the swimming pool is a later addition). The Herald characterized the architecture as “modified Mediterranean.” The house is built of brick, with concrete floor and roof structure. The site was an 85-acre estate on Resaca de la Palma off Old Port Isabel Road. The Miller House was one of a number of architecturally ambitious country houses constructed by Oklahomans in the Valley in the 1930s and early ‘40s. These included Casa Poinciana, the Hubert R. Hudson House of 1938 (which the BCC tour visited in 2011) and what is now called Casa de los Ebanos, the Frank Russell House at Barreda (1939, Stanley W. Bliss). The most architecturally celebrated of these country houses was the modern house that the Pan-American Airlines pilot George Kraigher commissioned the Los Angeles architect Richard Neutra to design for him in 1937.

The Williams House was built without central air-conditioning (the other grand house of this period in Brownsville, R. Newell Waters’s Dean Porter House on Palm Boulevard of 1941, was equipped with central air conditioning). Consequently its one-room-deep configuration was meant to stimulate breeze flow through the house. The architecture is a relaxed, regionalized interpretation of the Spanish Mediterranean style that had been popular in the Valley in the 1920s. Rather than emphasize picturesque incident and textural effusiveness (as Jason Mathews did at Quinta Mazatlán in McAllen, 1939), the architects simplified and streamlined their interpretation, substituting painted brick for stucco and low-pitched shingled roofs with exposed rafter tails for tile roofs. Steel casement windows and masonry solar screens (celosías) are austere rather than winsome. The Williams House is a counterpart to the pair of country houses in Weslaco that the BCC tour visited in 2013, the one-story John A. Knapp and two-story F. E. Knapp houses of 1939 by R. Newell Waters.

The architects of the Williams House were Alexander H. Woolridge (1893-1985) and Frank E. Torres (1904-1996). Woolridge was a Virginian who came to the Lower Río Grande Valley just after the First World War. He practiced in McAllen until 1936, when he moved his office to Brownsville. Woolridge was the architect of the First State Bank & Trust Co. in Río Grande City (1925), the Lee B. James House (1937) and Malcolm P. McNair House (1937) in Los Ebanos in Brownsville, and Brownsville’s first shopping center, Palm Village (1953), on Palm Boulevard. He was co-architect of Brownsville’s first two public housing complexes, Buena Vida Homes (1941) and Bougainvillea Homes (1941), collaborating on both with Frank Torres.

Francisco Edmundo Torres was born in Matamoros and studied architecture at the University of Texas, graduating in 1930. From 1933 to 1936 Torres worked in Mexico City with the architect Lewis Lamm-Martínez, Jr., and from 1936 to 1938 he practiced independently in Mexico City. Returning to Brownsville, Torres supervised construction of the Hubert Hudson country house and designed a house on Palm Boulevard for Salomé McAllen and William Scanlan (1940, altered). As a result of their public housing collaboration, Woolridge and Torres formed a partnership in 1940. Although it was dissolved in 1942 with the onset of the Second World War, the firm had a very productive run as Woolridge & Torres designed houses in Brownsville for future mayor Herbert M. Stokely, Dr. B. M. Works, Pan-American pilots Francis I. Jacobs and Richard C. Howard, and Dr. James L. Rentfro, as well as the V. E. Cook House in McAllen (demolished).

With the onset of war, Torres joined the staff of Pan-American Airways, which transferred him to Miami. Torres spent the rest of his career working for Pan-Am. Frank Torres was the first Mexican-American to be licensed to practice architecture in the Valley and one of the earliest in the state of Texas after adoption of a state licensing law in 1938. Text by Stephen Fox. Photos by RGVMod