Harlingen and Brownsville, the largest cities in Cameron County, the southmost county of Texas, were hotbeds of modern architecture in the post-Second World War period. Two architects who practiced in Harlingen—John Garth York (1914-1980) and Alan Yamato Taniguchi (1922-1998)—especially stand out. They were joined by York’s partner from 1948 to 1954, Walter Bowman (1912-1966), Bowman’s subsequent partners, E. Lester Swanson (b. 1927) and James W. Hiester (b. 1929), and Taniguchi’s partner, Charles B. Croft (b. 1927) in the collective effort to reshape the Valley (as area residents commonly refer to the Cameron-Hidalgo-Starr-Willacy county region) as a Modern Tropical Paradise in the postwar 1940s, ‘50s, and ‘60s. 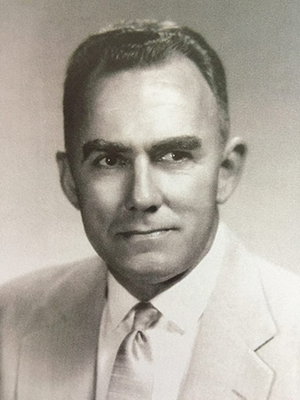 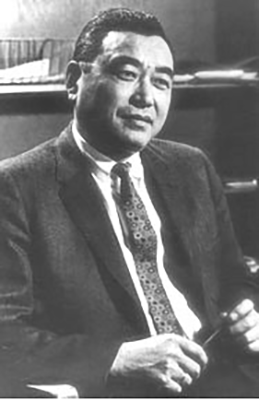 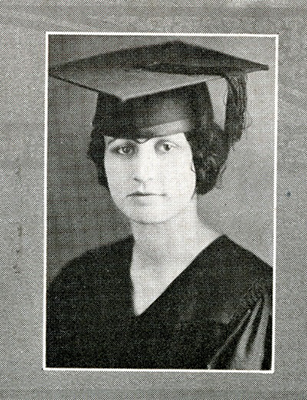 The Brownsville architects Robert E. Velten (b. 1929) and Gayle D. Wilhite (1922-2011) and the young Harlingen architects Tommy T. Carruth (1928-2014) and Robert W. Cline (1928-1976), who ran the Harlingen office of Edward J. Romieniec & Associates, as well as William H. Lambeth, Jr. (b. 1928) were additional contributors to the florescence of modern architecture along the south Texas border. The cities and towns of neighboring Hidalgo County also saw the emergence of modern practices. The veteran Valley architect R. Newell Waters (1899-1979) of Weslaco hired successive designers—Merle A. Simpson (1919-1993) and James Ingraham Clark (1918-2003)—so that Waters could compete with Cocke, Bowman & York. David P. Ashcroft (1934-1993) of McAllen, Max E. Burkhart (b. 1924) of Pharr, and Gene P. Hobart (b. 1928) of Weslaco were part of the Hidalgo County modern contingent. Zeb Rike of McAllen (1912-2007) lived long enough to be acknowledged as the dean of Valley architects. Zeb Rike’s firm continues as Rike Ogden Figueroa Allex. Walter Bowman’s firm, Bowman Swanson Hiester, survived as SHW Group until 2014, when it was acquired by Stantec. By that time it no longer had an office in the Lower Río Grande Valley.

Missing from the Valley’s modern line-up were Mexican-American architects. Julio Rafael Guerra (1927-1997) of McAllen was the sole Mexican-American registered architect in the Valley until the 1970s; he practiced as the associate and subsequent partner of the Weslaco architect William C. Baxter. Jimmie Villegas, Jr., (1934-2009) was a designer for Wilhite & Winans of Brownsville but he was never licensed as an architect. Homero Elizondo of Harlingen (1922-1979) was a draftsman and designer for the Gloor Lumber Co.; in this capacity Elizondo designed many of the middle-income subdivision houses that Gloor built in Harlingen and Brownville. Also missing from this picture were women architects. The Brownsville artist and architectural designer Ruth Young McGonigle (1902-1984) pursued an independent practice that lasted from the 1950s through the 1970s but she never sought to be licensed, although she was an early graduate of the Rice Institute architecture department. Van Glass, the wife of Cocke, Bowman & York’s draftsman Ed Glass, was a brilliant modern interior designer; she ran New Living, Harlingen’s “good design” shop, which was initially housed in the Clarke & Courts Building. 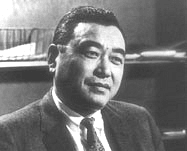 ArchitectureTexasville, TXTwo Famous Architects of Harlingen: John York and Alan Taniguchi By Norman Rozeff – Special to the Valley Morning Star. Posted: Saturday, February 21, 2009 12:00 am | Updated: 10:47 am, Fri Dec 14, 2012.For a small to medium-sized city that... 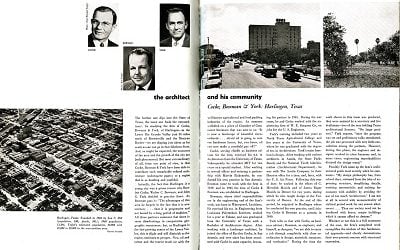 The Architect and his Community. Cocke, Bowman & York : Harlingen, Texas

ArchitectureThis article was published by Progressive Architecture 36 (June 1955) 102-115The further one dips into the State of Texas, the more one finds the extraordinary. In studying the firm of Cocke, Bowman & York, of Harlingen – in the Lower Rio Grande Valley...