This past month of August, I had the privilege of visiting the Bauhaus Archives and Museum in Berlin. If you love modern architecture like I do, you can understand why this was the highlight of my trip. The building’s architecture which was the source of fierce criticism back in the late 70s when Walter Gropius – founder of the Bauhaus – designed the edifice located today in a central and easily accessible location. Most hop-on-hop-off double decker buses make a stop at the Bauhaus. 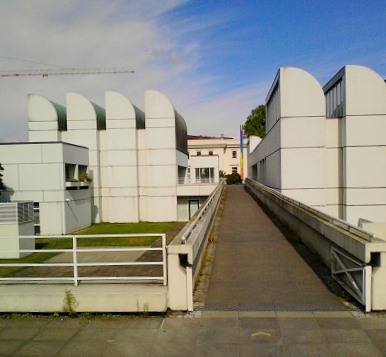 It was amazing to see how modern architecture is recognized and the museum a gathering place for locals and visitors alike. The décor is from the original promotional and educational materials which are still so relevant and hip today. The staff is very strict, and no one is allowed inside with backpacks or coats. I was wearing a light sweater, and as I attempted to remove it inside the gallery, I was immediately ordered to put it back or wrap it around my waist. Unfortunately, no photography is allowed, so the pictures I am sharing are only exterior shots. At the time, they had a fabulous exhibit by artist and Bauhaus professor Wassily Kandinsky. I wanted to share the news published by their website on near future plans to expand and renovate the facility. I only wish and hope I can go back when it is finished.

I encourage you to read about the history of the Bauhaus – especially if you love modernism – for it is a story of endurance and perseverance of a style, and how it transcended its borders. For instance, in 1933 when the Nazis closed down the Bauhaus school, and many architects fled, a group of Jewish ex-Berliners arrived in Israel, and over 4,000 buildings in Tel Aviv now bear the unique Bauhaus design.

The Bauhaus-Archiv / Museum für Gestaltung will be opening a new museum building on its site in the centre of Berlin in 2019, to celebrate the centenary of the Bauhaus. The historic building designed by Walter Gropius is also being renovated in accordance with historic monument requirements. At a meeting held on 13 November 2014, the Budget Committee of the German Bundestag announced the Federal Government’s proportional financial contribution to building projects in Berlin. The state of Berlin had already included the building project in its budget plan in December 2013.

The total costs for complete renovation of the existing building by Walter Gropius and for constructing the new museum building, amounting to € 56.3 million (as of November 2014) are to be met at 50% each by the state of Berlin and the Federal Government. Following provision of initial planning funds for the Bauhaus Archive amounting to € 500,000 in the federal budget for 2014, the Bundestag has now allocated a further € 27.6 million in the federal budget for 2015 for the renovation and construction project in Berlin.

In the future the current museum building, which Bauhaus founder Walter Gropius had still been able to design and which opened in 1979, will house the Bauhaus-Archiv – including the library, storage areas and facilities for cultural education. The projected Museum für Gestaltung will provide the first comprehensive presentation of the world’s largest collection related to the Bauhaus, in an exhibition space covering 2300 square metres. The background behind the plans for expansion is – along with the need for more space, which has been present since the founding of the museum – primarily the growing worldwide interest in the Bauhaus. In the last ten years, visitor numbers at the Bauhaus-Archiv in Berlin have doubled, reaching over 100,000 people per year. In 2012 there were even 115,000 visitors. Thus, even today, the institution has already taken its place among Germany’s major museums. On the other hand, the public can be provided with access to only a small fraction of the world’s most comprehensive collection related to the Bauhaus in the current exhibition space, which covers 700 square metres. Collections of design objects, furniture, photographs, graphic art and other works by artists including Vassily Kandinsky, Paul Klee, László Moholy-Nagy and Oskar Schlemmer as well as the estate of the Bauhaus founder Walter Gropius are all held in the institution’s storage facilities.