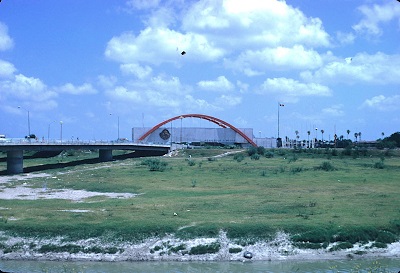 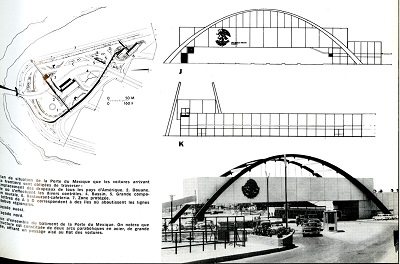 During a recent lecture for the Lower Rio Grande Valley chapter of the American Institute of Architects, Stephen Fox presented this information about “La Puerta Mexico” Matamoros – Brownsville international bridge.

The most publicized modern architecture built along the lower Río Grande in the 1960s was produced in conjunction with a Mexican government initiative, the Programa Nacional Fronterizo (National Border Program), known by its acronym PRONAF. Conceived by a former mayor of Ciudad Juárez, Chihuahua, Antonio Jáquez Bermúdez, who had also been director general of Petroleos Mexicanos, PRONAF was intended to reduce Mexico’s balance of trade deficit with the U.S. by improving the image of Mexican border cities, attracting more U.S. tourists, providing modern retail trade centers so that residents of Mexican border cities would buy consumer products on the Mexican side of the border, and stimulating employment with what became the maquiladora system by attracting foreign manufacturers to open plants where Mexican workers could assemble goods for re-export.

One significant way that Matamoros’s puerta complex of 1963 differed from contemporaneous south Texan modern buildings was its implicit urbanity. Pani and Galguera spatially integrated the complex with the adjacent Colonia Jardín and planned for the ways that pedestrians, public and regional transit, and cars and trucks would intersect the puerta.