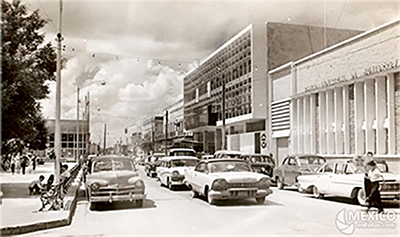 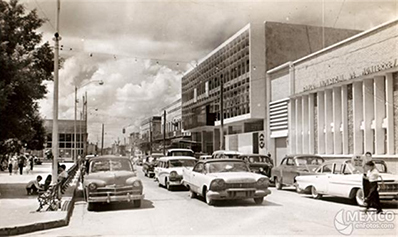 The Lázaro Cárdenas administration began construction in the 1930s of a network of flood protection levees, diversion dams, and irrigation canals that, as historian Casey Walsh demonstrates, converted the arid countryside of the municipio of Matamoros into one of Mexico’s most productive cotton-growing regions.

As a result of the spectacular cotton boom that erupted in the postwar 1940s, the west and south sides of Matamoros’s Plaza Hidalgo were rebuilt with modern buildings in the 1940s and ‘50s. A new Palacio Municipal of 1958 by the architect Jorge Elizalde spoke the international language of modern Regionalism, liberated from historical models with its brise-soleil (the sunshade screen), also a feature of the adjoining Banco Industrial de Monterrey of the late 1940s (on the far right).

These buildings have undergone extreme remodeling, and they do not look like this anymore.

An even more impressive demonstration of Mexican cultural centralization involved modern city plans—planes reguladores—that one of the leading Mexican architects of the mid-century period, Mario Pani—seen here in the new Palacio Municipal in Matamoros—prepared for the border cities of Matamoros, Piedras Negras, and Ciudad Juárez in 1958 under the auspices of another state ministry, the Secretaría de Patrimonio Nacional.