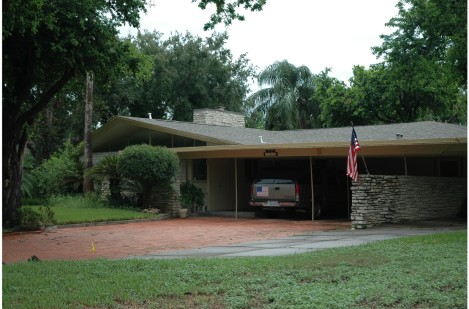 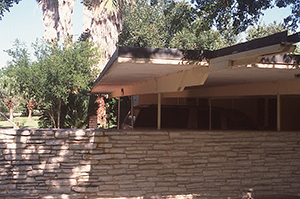 It is intriguing to contrast the interpretation of Frank Lloyd Wright’s Usonian architecture in Matamoros in the 1950s with its interpretation by Cocke, Bowman & York 25 miles to the north in Harlingen. Gale Cook, a draftsman for the York firm in the early 1950s, identified what he called the “cut-back eaves” of the Thise House of 1950 in Harlingen as Wrightian.

The scale of the one-story Thise House is different from its two-story Matamoros counterparts, reflecting the suburban spatiality that constituted the field of U.S. postwar practice. The composite construction of the house—compound wood beams are bolted to exceedingly skinny steel pipe columns—highlights the tectonic discipline of mid-century modern architecture and produces deliberately thin profiles that contrast with the much thicker profiles resulting from concrete construction in Matamoros.