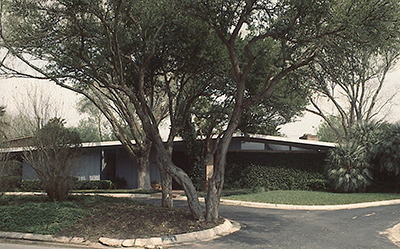 An expansive house with low-pitched roof and glazed gable for Dr. George Willeford of 1957 was one of several Taniguchi designed in Laurel Park.

Unlike John York and Walter Bowman, Taniguchi and his family did not live in Laurel Park. The deed restrictions in Laurel Park specifically excluded “any person or any descendant of any person of the following nationalities or races, to wit: Negro, Mexican, Chinese, Japanese,” even though the restrictions were filed in 1949, the year after the U.S. Supreme Court outlawed the use of deed restrictions for the purpose of racial exclusion. Such attitudes did not seem to harm Taniguchi’s professional opportunities, however.