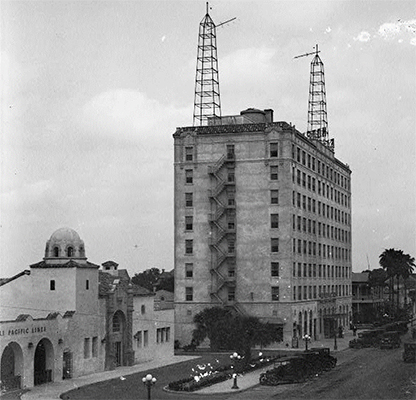 On the Texan side of the border during the second half of the 1920s, scenographic Spanish Mediterranean architecture identified buildings linked to transportation, communications, and trade technologies as modern. Both of Brownsville’s railroad passenger stations, its tallest building, the eight-story Hotel El Jardín of 1927 (crowned with 60-foot-tall radio transmitting towers), the U.S. Border Services Building of 1929 at the Gateway International Bridge , and Brownsville International Airport terminal of 1929 inagurated by Charles Lindberg and Amelia Earhart, deployed winsome combinations of stucco, tile, and cast stone to assert the eclectic proposition that in an Exotic Tropical Paradise there was no contradiction between modernity and tradition.

Photo and text by Stephen Fox