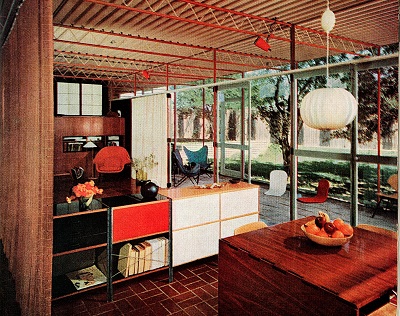 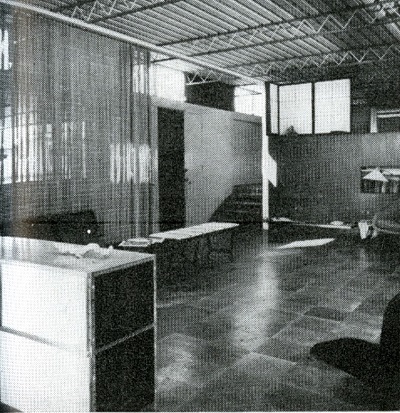 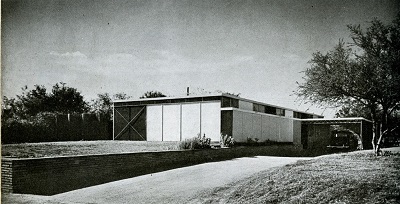 The most radical of Cocke, Bowman & York’s houses was the house that York designed for his wife, Patsy Catsinas and their three children, Sandra, James, and Daniel. Built in Laurel Park in 1952, the York House was a South Texan version of Ray and Charles Eames’s Case Study House No. 8 of 1949. This is a steel-framed house, faced with modular insulated cement asbestos panels, that turns a blank wall to Laurel Court except where the screened breezeway, marked by turnbuckled tension cables, is inserted. The slender, north-facing clerestory window on the street front highlights the steel bar joists supporting the roof.

The plan of the York House isolates living spaces between the west-side interior corridor, lined with storage, and the east-facing screened breezeway. Because the site slopes down from the street to Arroyocito (or Little Creek), the house steps down in section from the bedrooms to the high-ceilinged living space. All construction is exposed.

Behind the bamboo curtain was the galley kitchen, next to the front door. For all practical purposes, the kitchen was part of the living room.

When the York House was illustrated in Progressive Architecture magazine in 1955, it was accorded a color photo. Here you see the layers of sliding screens, the red-painted bar joists and columns, and the Herman Miller and Knoll furniture. Ulric Meisel’s photos of the York House capture the sense of joyous spontaneity the house exuded. It seemed to celebrate freedom from outdated social convention and tired formulas for what houses ought to look like (Sandra York said that she and her brothers loved to swing hand-over-hand on the bar joists). The furniture installed by Van Glass supported formation of identity and subject positions that affiliated Cocke, Bowman & York’s other clients, with the discourses of modern architecture and design, and the superior lifeways imputed to those who had the courage, the ethical conviction, and the clarity of judgment to break the chains of enslavement to the past. This is a mythical construct.