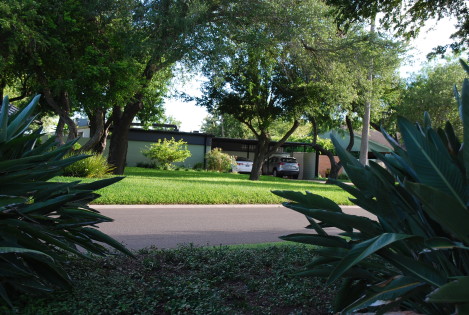 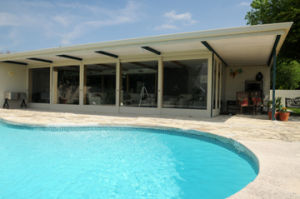 My husband and I are crazy about the architecture from the 50’s and 60’s, we love our home designed by Architect John York in 1949. It has taken us about 12 years to restore this home, and we know this project will continue for as long as we live here.
The house has been visited by several architectural groups and featured in the November/December issue of Texas Architect magazine and a couple of times in the local newspaper. This house was built entirely with steel, it has a flat roof and “I” beams that sometimes are also referred to as “H” beams. The home’s design consists almost entirely of large pane windows and a loft-like floor plan. It has heavy, solid wood sliding doors reminiscing of those seen in Japanese designed homes.

Architecture historian Stephen Fox wrote in 2003; the tour focused on the work of Harlingen’s great mid twentieth century modern architects: John G York and Alan Y. Taniguchi. York and Taniguchi responded to the Valley’s hot, humid climate with “L” plans oriented to the prevailing breeze, screened breezeways and open plans. About our house he wrote: the other was flat roofed, with slender white-painted steel H columns, fascia, and decking, evoking the sort of houses Pierre Koenig designed for the Case Study program in the late 1950’s. ..with sliding doors opening to side or rear gardens. Storage walls of built in cabinets lining corridors, sliding louvered panels instead of fixed walls, and corrugated translucent glass panels demonstrated the lyrical ingenuity characteristic of York’s architecture.
There are still a few homes on the market here in Harlingen that were built during this period. We would love to see them restored and, we hope that whoever purchases them, will restore them to their original glory.