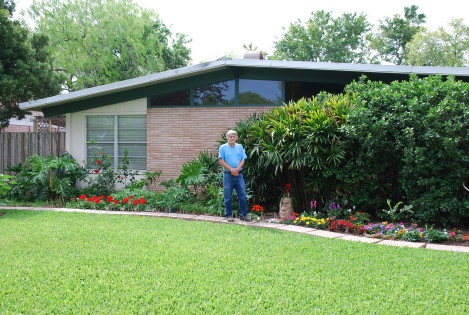 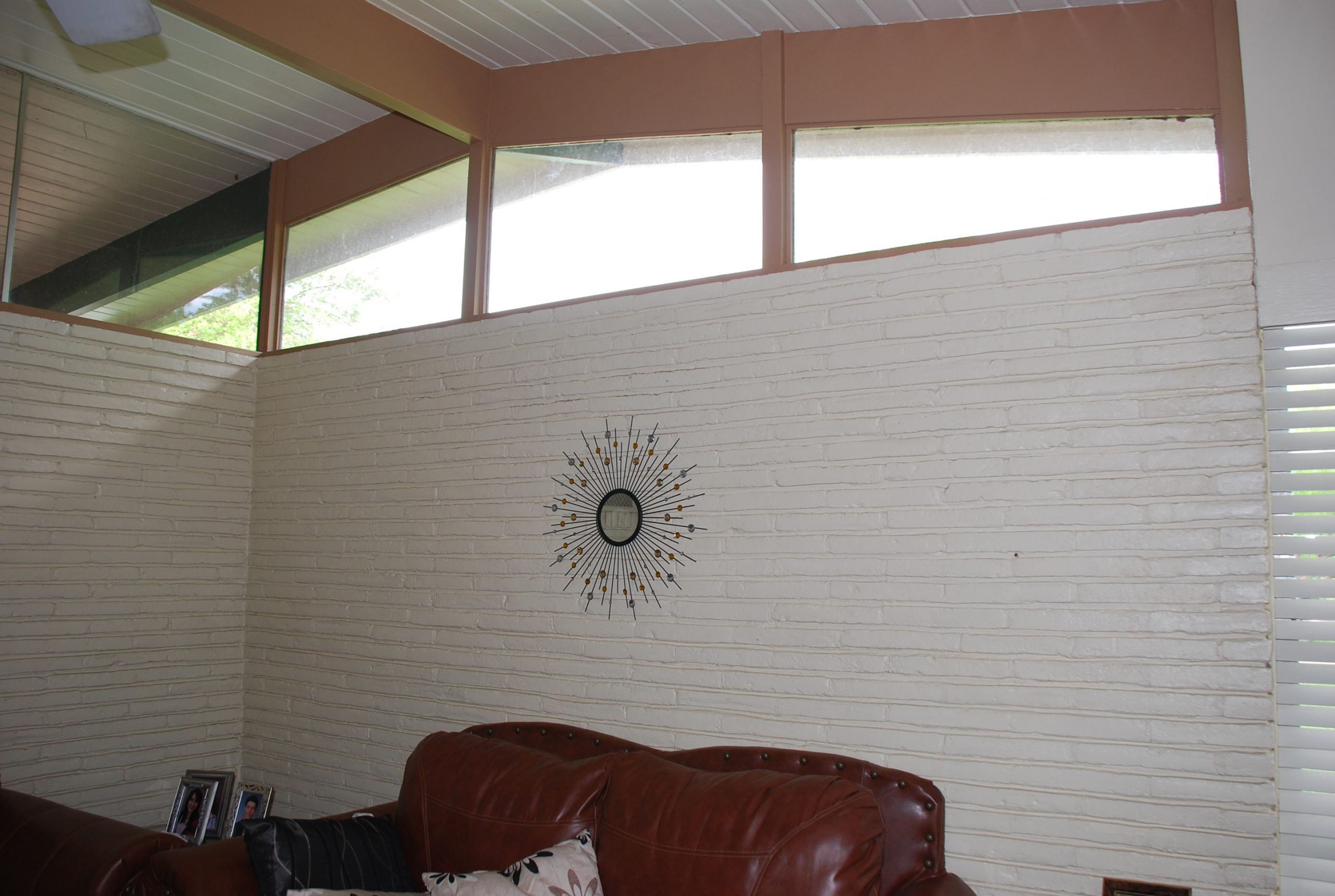 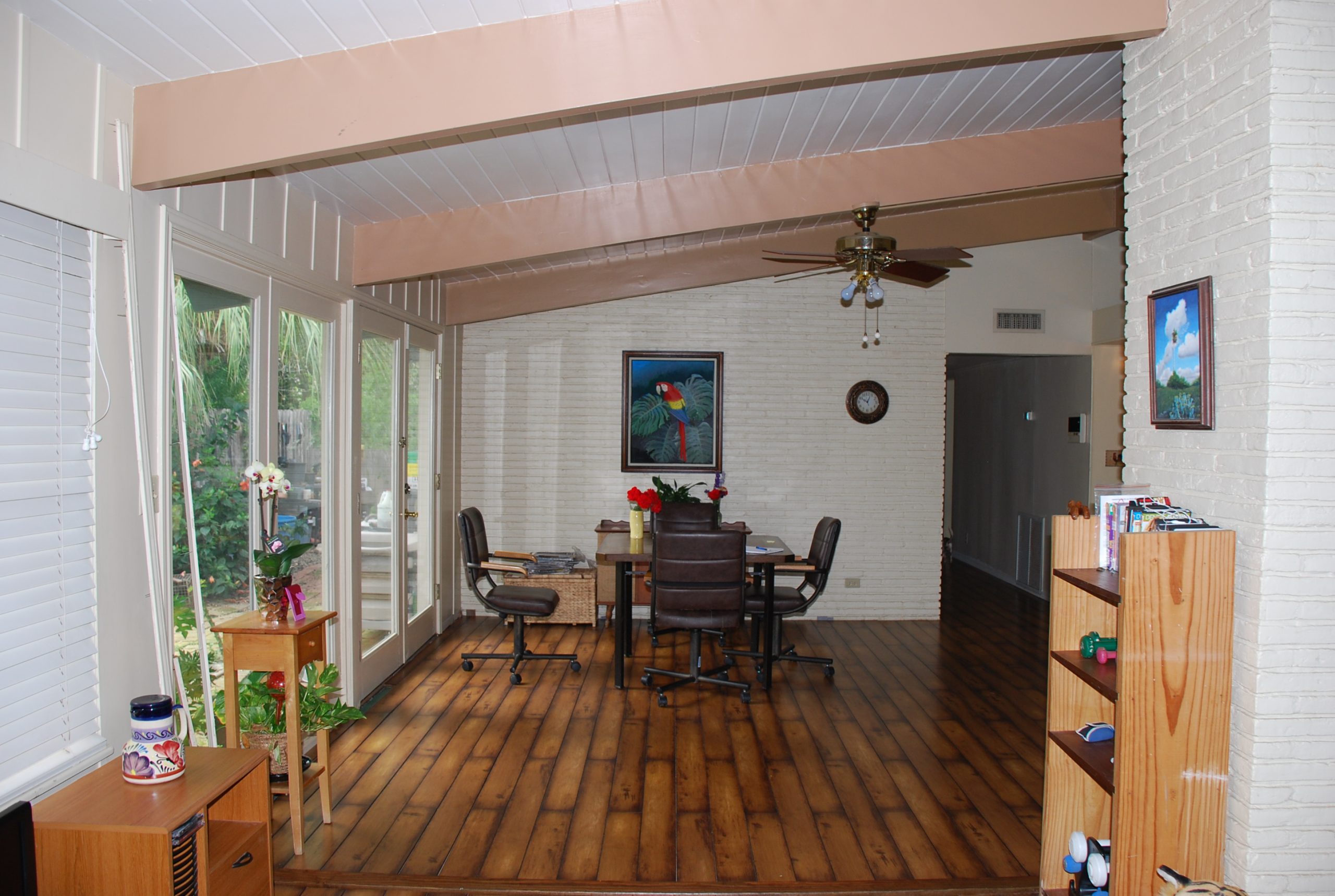 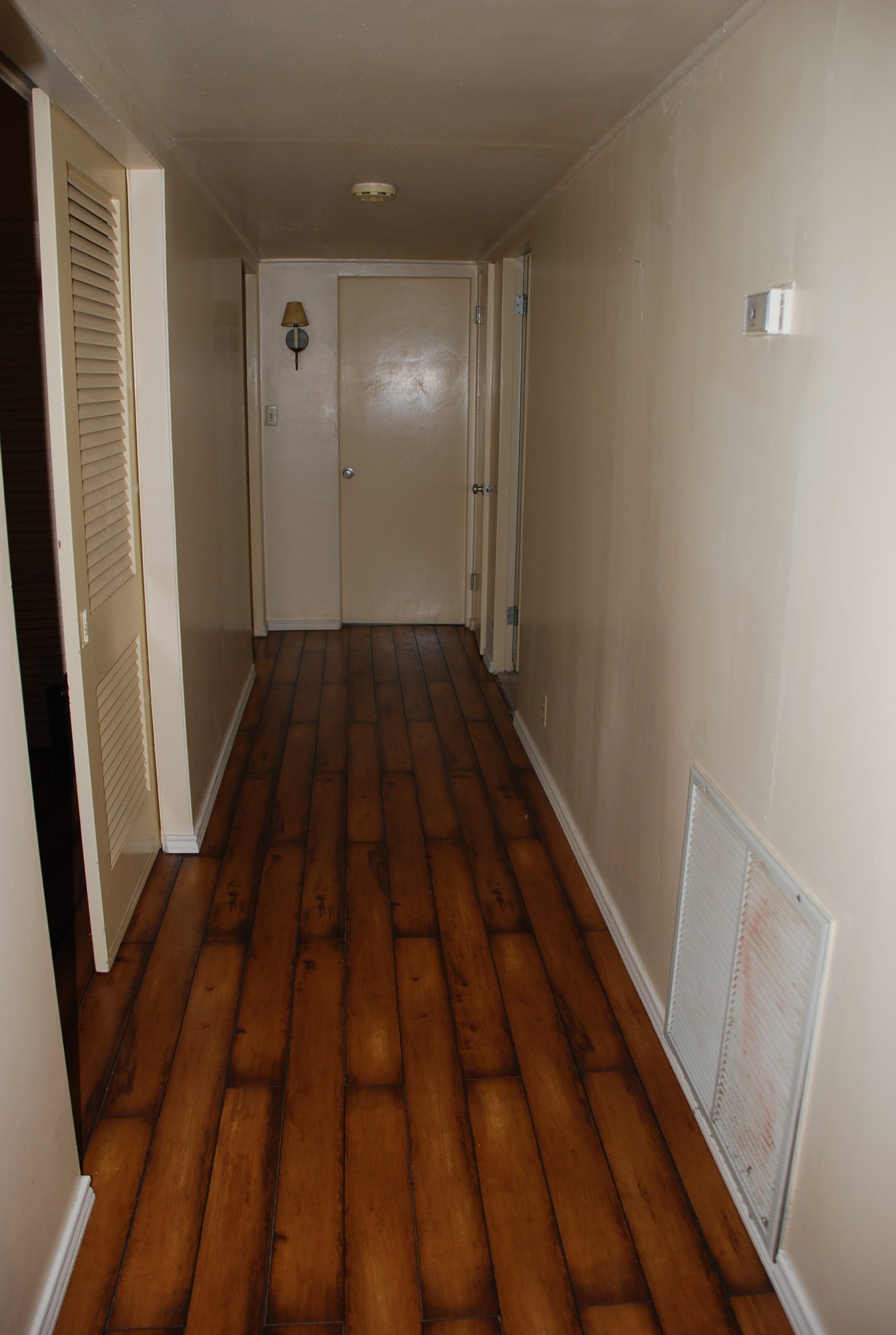 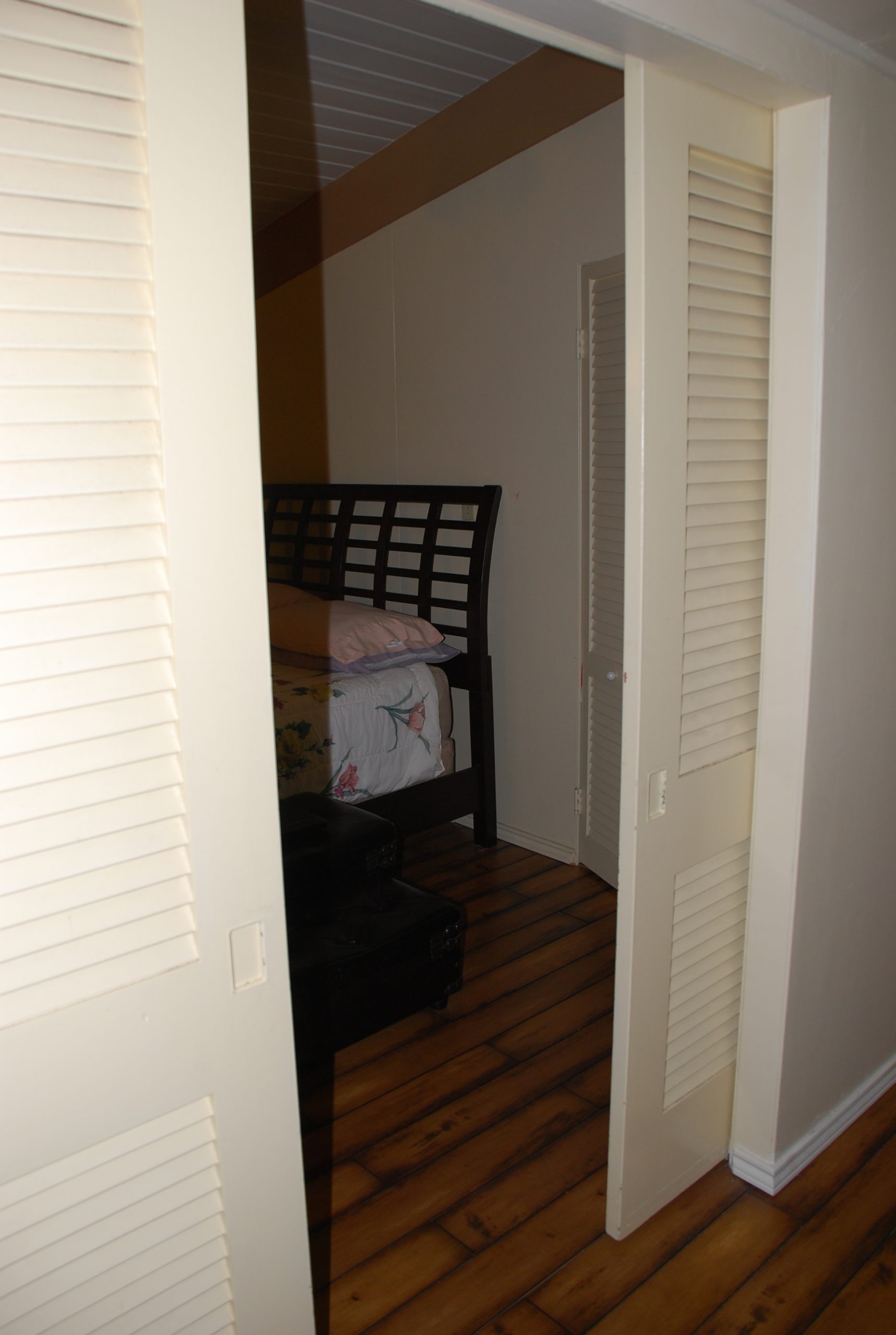 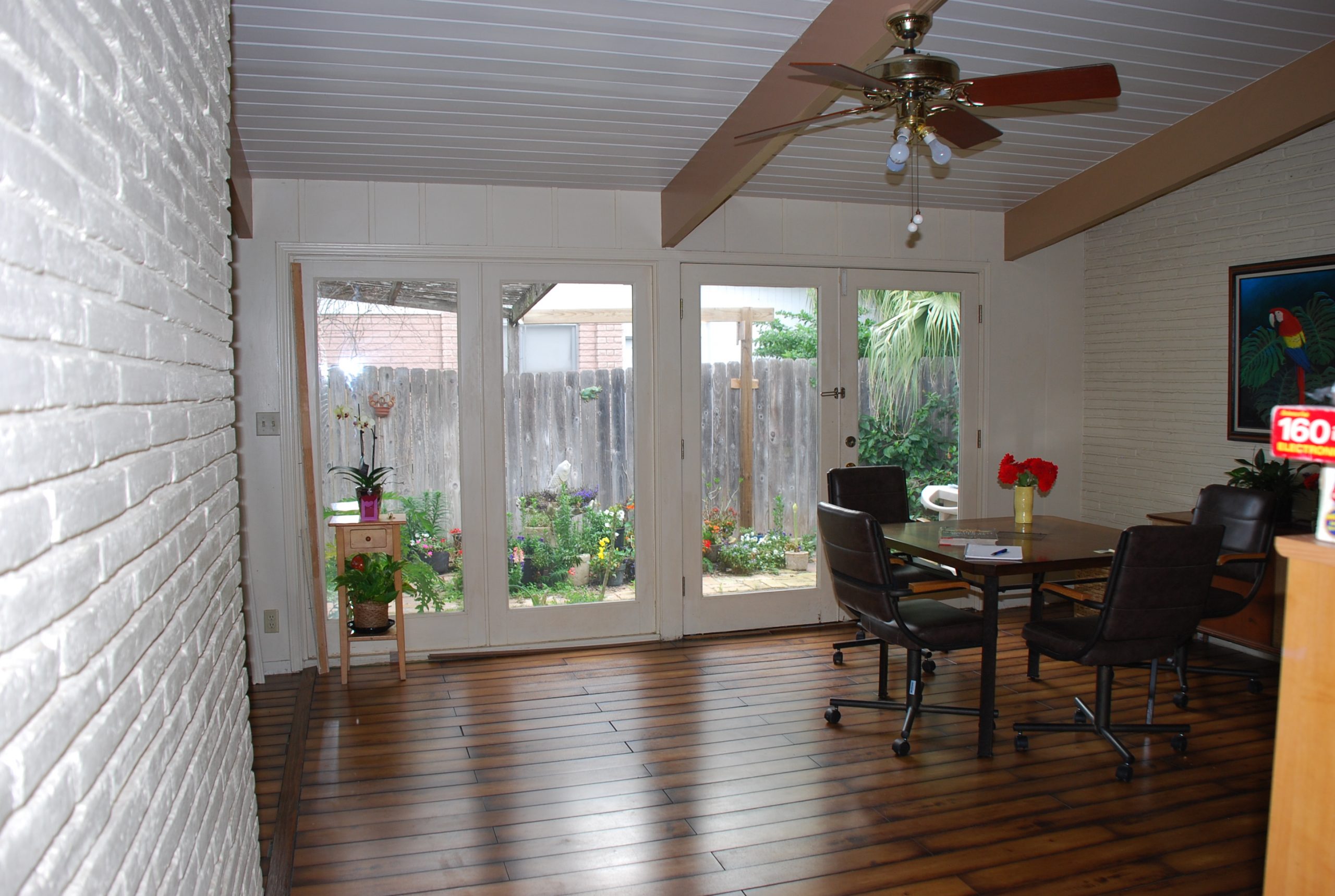 Jack King was no stranger to Alan Y. Taniguchi’s architecture when he bought a house in Harlingen’s Laurel Park, for Jack studied under Taniguchi at the University of Texas back in 1967. “It was only for one semester, but I still remember a lot of what he taught me,” said Jack.

Jack and his wife Nina relocated their family to Harlingen from La Feria about a year ago when, after visiting numerous properties, opted for this 2,600 sq. ft. Taniguchi home. “I loved the angles the house had and the natural light that came into every room, but most importantly I loved all the storage space and built in cabinets,” expressed Nina who works as a telephone triage nurse at Harlingen’s VA Clinic. Nina also loved the large room on the west side of the house where jack could have his man cave because, she stated, after retirement Jack is busier than ever painting, writing, sculpting and reading lots of books.

During our visit, Jack reminisced and shared an anecdote from his days as a Taniguchi student. According to Jack, Taniguchi related to his class how he noticed semi-trailer trucks were heading east to Houston full of valley crops, and then realized they would have to come back empty, and how he set out to contract these truck drivers to bring him the lumber he needed to build homes saving considerable amounts of money on shipping costs. “To him saving on building costs was an important issue he stressed on us,” reflected Jack who admired his professor, but not the way others were teaching architecture then. “They were not promoting creativity, but influencing students to stick to the popular styles of architecture of the time. They believed there was no use in creating something that would not sell,” stated Jack who disillusioned left architecture school and earned a Bachelor’s of Science in Economics and Humanities instead.

The house was built around 1955 for James L. Mayer and has the traditional low-pitch roof lines we have seen in other Taniguchi homes of the area. All the bedrooms connect through one hallway, and all bedrooms have large windows that allow plenty of sunlight to come in as well as welcoming great outdoor views. The house has a fireplace, three bedrooms and three bathrooms along with a large room that according to Jack was added later, and was not part of the original design. One of the bedrooms has sliding louvered doors popular with pre A/C modern architecture. Jack has slowly remodeled his Taniguchi home, and mentioned the challenges of finding the same materials used back when the house was built like the 2 ½ X 7 ¼ bars that have now been replaced with 2 X 6’s among other things. Electric outlets are another significant difference between old and new homes, but those are minor things that have not prevented the King family from enjoying their historic new home. And best of all, we know this Taniguchi house could not be in better hands.

4/16/56 The Harlingen State Bank is converted from a state to a national bank and on 5/28/59 is granted full trust powers. The following year its capital structure is in excess of $900,000 and its deposits $10.5 million. Its 1960 officers are: D.B. Dunkin, president; Paul M. Johnson, vice-president; J.M. Powers and Dial M. Dunkin, assistant vice-presidents; James L. Mayer, cashier; R.C. Blaylock, J.E. Tarr, and Thomas S. Young-blood, assistant cashiers. In 1967 it moves from 219 E. Jackson to a modern building on E. Van Buren. On 9/7/82 it opens a branch on 77 Sunshine Strip and on 12/4/84 at the Valley Vista Mall. D. B. Dunkin will be a moving force in getting the Texas State Technical Institute to Harlingen. Over time he will be president of the Rotary Club, Chamber of Commerce, and youngest president ever of the Valley Bankers Association.

1971 (summer) The Plaza National Bank is started by Harlingen businessmen. Its name is changed on 1/13/84 to Bank of the Southwest as the FDIC approves it for coverage. On 10/15/84 it merges with Southwest Bankshares Mercantile of Texas Corp. to become part of a 67 institution M-Bank network. Directors and founders included Dr. Juan Dreck, L.T. Boswell, Jr., Fausto Yturria, Morris Carrasco, Francisco Gonzales, Moise Vela, Bob Youker, Charlotte Calhoun, James Mayer, and Alfred Wolk, Jr.