(I know his name, no matter)—so much less!

Well, less is more, Lucrezia: I am judged.” 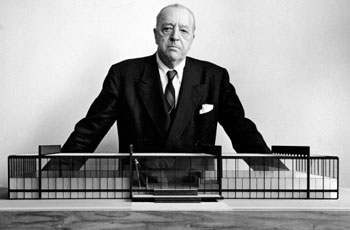 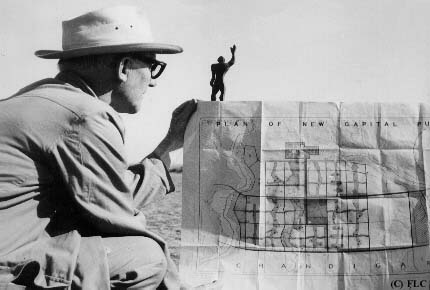 Robert Browning was the first to pen the phase “less is more” in his 1855 poem Andrea del Sarto Called “The Faultless Painter.” However, it was a man born just one year after Browning wrote those words who really put the phrase “less is more” into the popular lexicon: architect Ludwig Mies van der Rohe, who by the way is usually credited with also coining the phrase “God is in the details.”

Mies, along with Le Corbusier, Frank Lloyd Wright and Alvar Aalto are often cited as the guiding lights of modern architecture, and those two phrases may best capture the direction and philosophy behind the movement. Of course, those are mere words, they are gone as soon as they are spoken. The work of the architect endures and the genius of modern architecture is to take the ideas and values of “less is more” and “God is in the details” and express them in form and function, and that leads to the basic elements of modern architecture.

Can one of the major elements of modern architecture be a lack of elements? Modern architecture attempts to strip away or greatly simply elements that are unnecessary and merely ornamental. Gone are the decorative moldings, shutters and other trim elements that marked styles like the Victorian painted ladies. Touring modern and midcentury modern homes, RGV residents will find structures that are pleasing in their simplicity.

This approach carries over to the overall shape of the homes. To the modern and mid century style architect, why use two lines connected by a 90 degree angle for a roofline when one simple flat line would suffice? With modern mid century homes you will discover designs that rely on flat roofs to create a broad, simple, horizontal plane.

Taking this further, modern architecture is noted for its use of rectangular forms. The straight line of the flat roof rests above a living space of linked rectangular boxes. Planes are vertical and horizontal. Corners are sharp.

Distilling these ideas—and the notion of less is more—to their essence naturally leads to minimalism which becomes very important in the 1960s through the early 1970s. At this point, traditional Japanese design and architecture is influential. A design is reduced to its ideal simplicity where nothing can be added nor taken away that would improve it functionally or aesthetically.

Louis Sullivan, Frank Lloyd Wright’s mentor, said famously, “Form follows function.” In modern and midcentury style design, the function of a structure will determine its form and this is often wedded with the space or the land upon which the building stands.

An iconic iteration of “form follows function” is Frank Lloyd Wright’s introduction of the carport. It was during the post World War II years that America’s love affair with the car truly ignited. President Eisenhower established the Interstate Highway System and Americans were “on the road” to prosperity. What more is needed to protect a car than a simple flat shelter? Elements like the sparse carport began to almost define residential neighborhoods in areas like Los Angeles.

Unnecessary walls are removed in modern mid century homes. Combining simplicity with “form follows function” leads to an open interior. If a wall serves no function other than to partition off part of the home, there’s no reason for it. Communicating and navigating a home with fewer walls is much easier and more efficient. Of course, in the Post War days, home or domestic efficiency was almost an obsession.

The openness of interiors goes further than a reduction of the number of walls; it is also seen in the generous use of glass that opens the interior up to the outside. This creates a “luxury of light” inside the home and also complements the way the home harmonizes with the land it occupies. The idea is to preserve the natural contours of the land and then be able to appreciate the land from within the home.

Midcentury modern homes developed the use of post and beam construction, which made the open interiors and wide windows possible. Architects no longer had to be so dependent on interior walls to support roofs.

Inspecting midcentury modern and modern homes, RGV property owners will find that the natural appearance of materials is stressed. Wood is stained instead of painted. Traditional materials like wood and brick are combined. Also, this was an age when science and technology held much promise.

New materials were being developed as well as new applications for existing materials. For example, concrete slab floors are a common feature in modern homes, sometimes with the then-revolutionary “radiant heat.” Even structural materials are out in the open for everyone to see. Steel trusses and columns are on display. Concrete blocks are used as a finish material.

Today we see new homes and buildings that pick up many of the basic design and construction elements that were first introduced and popularized with modern and midcentury style homes and buildings, such as open floor plans and bringing the “outside in.”

What is modern: characteristics of modern architecture