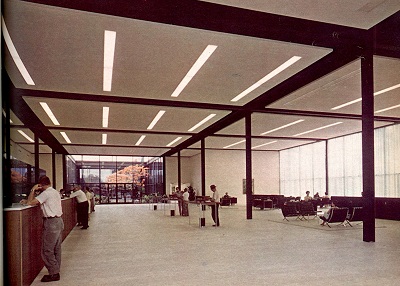 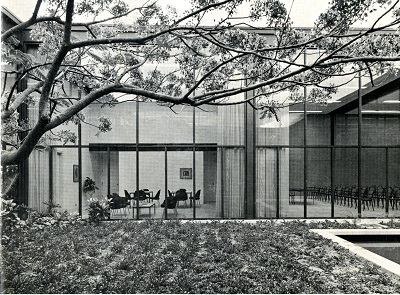 This building has lost its architectural greatness, so we have added this article under the “Lifestyles” menu of RGVMOD. We find this building just fascinating! During a recent lecture, Stephen Fox presented:

By the late 1950s, modern architecture was changing as architects sought more monumental forms of expression. This is visible in the magisterial design that the Houston architects Herbert Cowell, Hugo V. Neuhaus, Jr., and David Haid produced for the McAllen State Bank Building in downtown McAllen of 1961.

George Cserna’s photo of the banking hall, published in Fortune magazine in 1961, with its exposed steel-frame structure, glass curtain walls, and flowering jacaranda tree, makes clear that the McAllen State Bank met the same criteria for modern design that York’s buildings had.

What changed was the substitution of gravitas, solemnity, and spatial grandeur for the spontaneity, exuberance, and intimacy characteristic of York’s and Taniguchi’s buildings. The dramatic transparency that the bank’s east-facing curtainwall made possible was facilitated by central air-conditioning. Between 1950 and 1960, air-conditioning went from being an expensive option to an affordable necessity in architect-designed buildings.