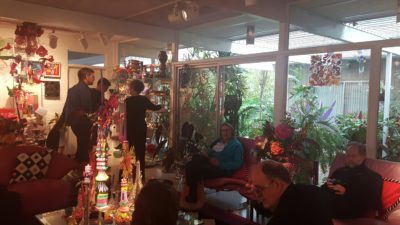 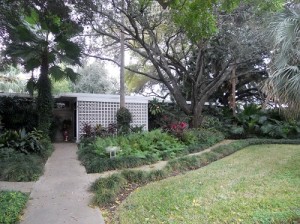 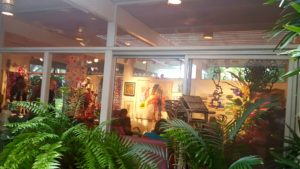 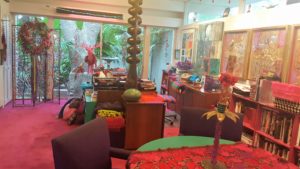 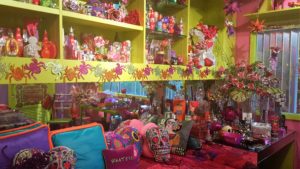 McAllen artist and art collector Ann Maddox Moore built this amazing modern house, designed by Merle A. Simpson, in 1959. Nestled at the end of a cul-de-sac that backs up to the Louisiana-Río Grande Canal Co.’s main canal, which ran parallel to S. 2nd Street, the one-story, post-beam-and-deck house is extraordinarily simple. A honeycombed solar screen shields the entrance to the house, which is laid out on a planning module around an interior patio shaded by a ramada. An open carport is the house’s most visible space when seen from the street. Ann Moore has reinterpreted her house as a frame for her sensational, exuberant assembly of brilliantly colored art works and objects. These charge her simple, straightforward house with exceptional energy, as do the subtropical plantings that now embower the house and patio. Ann Moore has transformed the house into an installation, but one that she happily lives in.

Merle Simpson came to the Valley from the Fort Worth office of Wyatt C. Hedrick to work for R. Newell Waters in 1949. Simpson was from Iowa, where he had attended architecture school. During the seven years of their association, Waters and Simpson designed public schools in Weslaco, Donna, Edcouch-Elsa, Los Fresnos, La Sara, Lyford, and Santa Rosa, as well as auto dealerships for the Knapp Motor Company in Weslaco, Mercedes, Harlingen, and Brownsville, and the Harlingen State Tuberculosis Hospital. Simpson became Waters’s “modern” designer, as can be seen in the Hidalgo County Courthouse in Edinburg. After Simpson went on his own in 1956, he designed houses in Weslaco, Harlingen, and McAllen, and additions to the Fairway Motor Hotel complex in McAllen. Simpson moved to Austin in 1962, where he was involved with development of the Lakeway complex. He was the architect for a substantial addition to the Hidalgo County Courthouse (1980). He subsequently practiced in Houston and in Philadelphia, where he died in 1993. McAllen architect Robert Simpson of Boultinghouse Simpson Gates is the son of Merle Simpson.