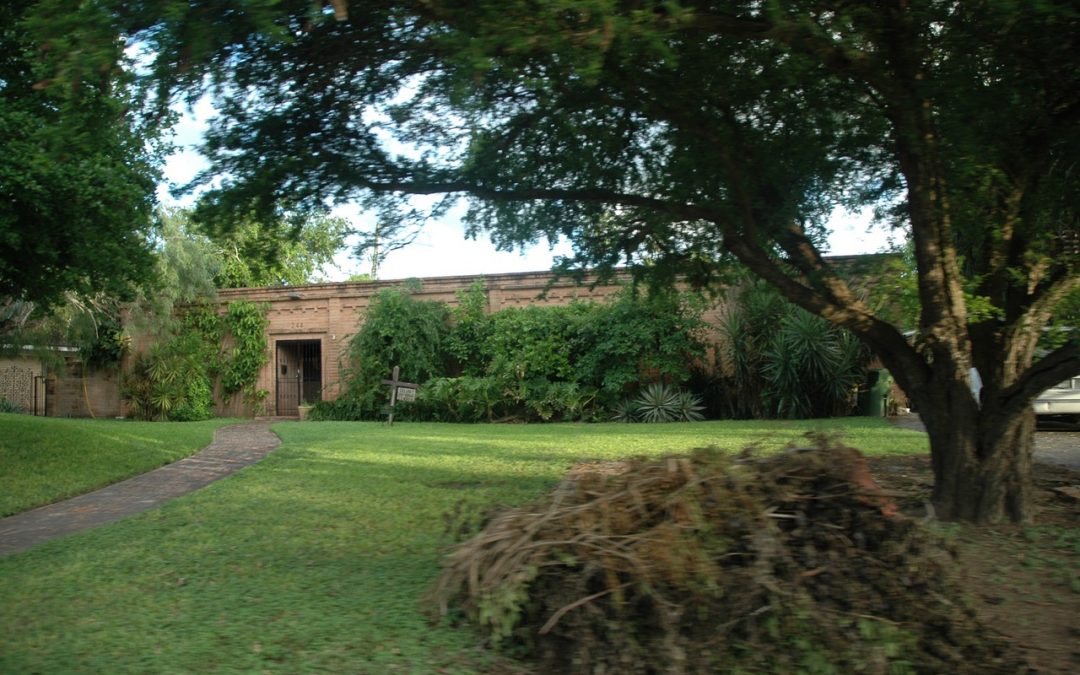 This post was written by Architecture Historian Stephen Fox on May 3, 2020 for RGVMod

In May 2020 demolition is imminent for an exceptional example of the mid-twentieth-century neo-Border Brick architectural style, the Pearl Milor and J. Kendall Hert House in the Brownsville neighborhood of Río Viejo. Río Viejo was Brownsville’s elite garden suburban neighborhood of the 1950s. Developed in 1950-51 by the Harlingen real estate investors W. Vernon Walsh and Paul Carruth, the 118-acre subdivision incorporates several bends of Town Resaca, the sinuous, lagoon-like abandoned distributary of the Río Grande that courses through the center of Brownsville. The Hert House occupies one of the neighborhood’s resaca lots at 244 Calle Cenizo.

The Hert House was built in 1962. It is the work of the Brownsville artist and architectural designer Ruth Young McGonigle (1902-1984). Ruth Young was a Houstonian who studied art at what is now Rice University in Houston in the early 1920s. At the time, the only way that a student at Rice could concentrate in art was to become an architecture major. Ruth Young was one of the early women graduates of what is now Rice’s school of architecture. Upon completing her Bachelor of Architecture degree in 1924, she briefly worked for the professor of architecture, William Ward Watkin, before marrying one of her Rice classmates, George McGonigle, Jr., and moving to his hometown, Brownsville in 1925.

In 1935 Ruth McGonigle became one of the twelve founders of the Brownsville Art League and she remained a devoted member throughout her life. She put her artistic talent to work designing floats and decorations for Brownsville’s annual pre-Lenten carnival, Charro Days, after it was begun in 1937-38. By the late 1940s she also taught art at Texas Southmost College. Ruth McGonigle had a small architectural practice, although she never sought licensing as an architect and never identified herself professionally as such. Architectural practice became a bigger part of her life after George McGonigle, who was a pilot, was killed in an airplane accident in 1954.

The Hert House stands out in Ruth McGonigle’s career because it pays homage to the nineteenth-century Border Brick style, the transnational architectural vernacular that took form in Matamoros in the 1820s and ‘30s, was transmitted to the new town of Brownsville after 1848, spread upriver as far as Laredo and Nuevo Laredo by the 1870s, and continued to affect building construction along the lower Río Grande as late as the 1910s. During the 1930s, American architects became fascinated with regional vernaculars such as the Border Brick style. The Matamoros-born, University of Texas-trained architect, Frank E. Torres, designed the first building in Brownsville to demonstrate an awareness that Brownsville possessed its own regional architecture, the two-story house of Salomé McAllen and William Scanlan at 1905 Palm Boulevard in Los Ebanos of 1940. (Ruth McGonigle would add to the house for Judge and Mrs. Scanlan in the 1960s.) Dr. Vidal Longoria built another early example of this trend, his medical office building at 800 E. Adams Street (1947). In 1954, Mr. and Mrs. Herminio Yturria had the Weslaco architect William C. Baxter design their one-story, patio-centered house at 154 Calle Cenizo in Río Viejo in the neo-Border Brick style. Ruth McGonigle’s earliest example was the brick-walled house she designed for the restaurateur Earle Brown, Jr., and his partner the interior designer Al Young at 225 Sunset Drive in Los Ebanos in 1960.

The planar front wall of the Hert House is divided by vertical brick pilasters. The pilasters support a parapet at the top of the wall accentuated by molded horizontal brick courses. Beneath the parapet, a horizontal brick course is extruded forward from the plane of the wall between the pilasters. At intervals, vertically stacked brick corbels project forward from the bottom of the extruded horizontal brick course. The pilasters frame a recessed entrance alcove containing the front door and two windows. Each window is surfaced with a decorative iron grille. These architectural attributes affiliate the house with the nineteenth-century Border Brick style. Both Matamoros and Brownsville contain many extant examples of nineteenth-century Border Brick style buildings, with their distinctive combination of vertical pilasters, horizontal parapets and entablatures of molded brick, decorative brick pendants, and (in Matamoros) window openings protected by wrought iron grilles.

The Hert House was joined by other notable examples of this trend in the 1960s. In McAllen, the Nuevo Laredo architect Ignacio Quiñónez Peña designed the Shelby Longoria Kowalski House at 3325 Kent Lane. The Mission-born Houston architect Kenneth Bentsen designed the house for his sister, Betty Bentsen Winn (1965) at 1500 Iris Avenue. And the Weslaco architect Merle A. Simpson designed Chula Vista (1969), the house of Kenneth Bentsen’s cousin, Calvin Bentsen, at 501 Chula Vista Avenue. The Henry B. Coons House at 805 Acacia Lake Drive and the Narciso Escareña House at 7 Medical Drive are later examples of this architectural trend in Brownsville.

Ruth McGonigle’s clients were Pearl Milor (1906-2005) and James Kendall Hert (1908-1991). Mr. and Mrs. Hert were Oklahomans. They came to Brownsville in the mid 1940s, when Hert worked as an assistant cashier at the First National Bank. In 1950, they moved to Calgary, Alberta, Canada, but returned to Brownsville in 1958. At the time the house was constructed, Hert represented the stockbrokers Sanders & Company; by 1970, he represented the San Antonio stockbrokers Lentz, Newton & Company. At the times of their deaths, Mr. and Mrs. Hert were living in Ardmore, Oklahoma. Subsequent owners of the house included Raquel Nieto de Silliman (1924-2011) and her husband, Elton Ross Silliman (1903-1976), and Dorothy Parker Greaney (1924-2018).

Although the Brownsville neighborhoods of Los Ebanos and West Brownsville, as well as the Original Townsite, are protected by the City of Brownsville’s historic zoning overlay, Río Viejo is not. One house in Río Viejo, the Martín E. García House of 1961 at 155 Calle Anacua, is listed in the National Register of Historic Places. No building in Río Viejo has preservation protection and thus any one can be demolished whenever an owner chooses.

The Hert House is historically significant as a modern interpretation of the nineteenth-century Border Brick style, a regionalist architectural trend that sought to recognize the value of local historical culture. The house is also significant as one of the major works of the Brownsville artist and architectural designer Ruth Young McGonigle, who was especially identified with the mid-twentieth-century revival of the Border Brick style along the Texas-Tamaulipas border.